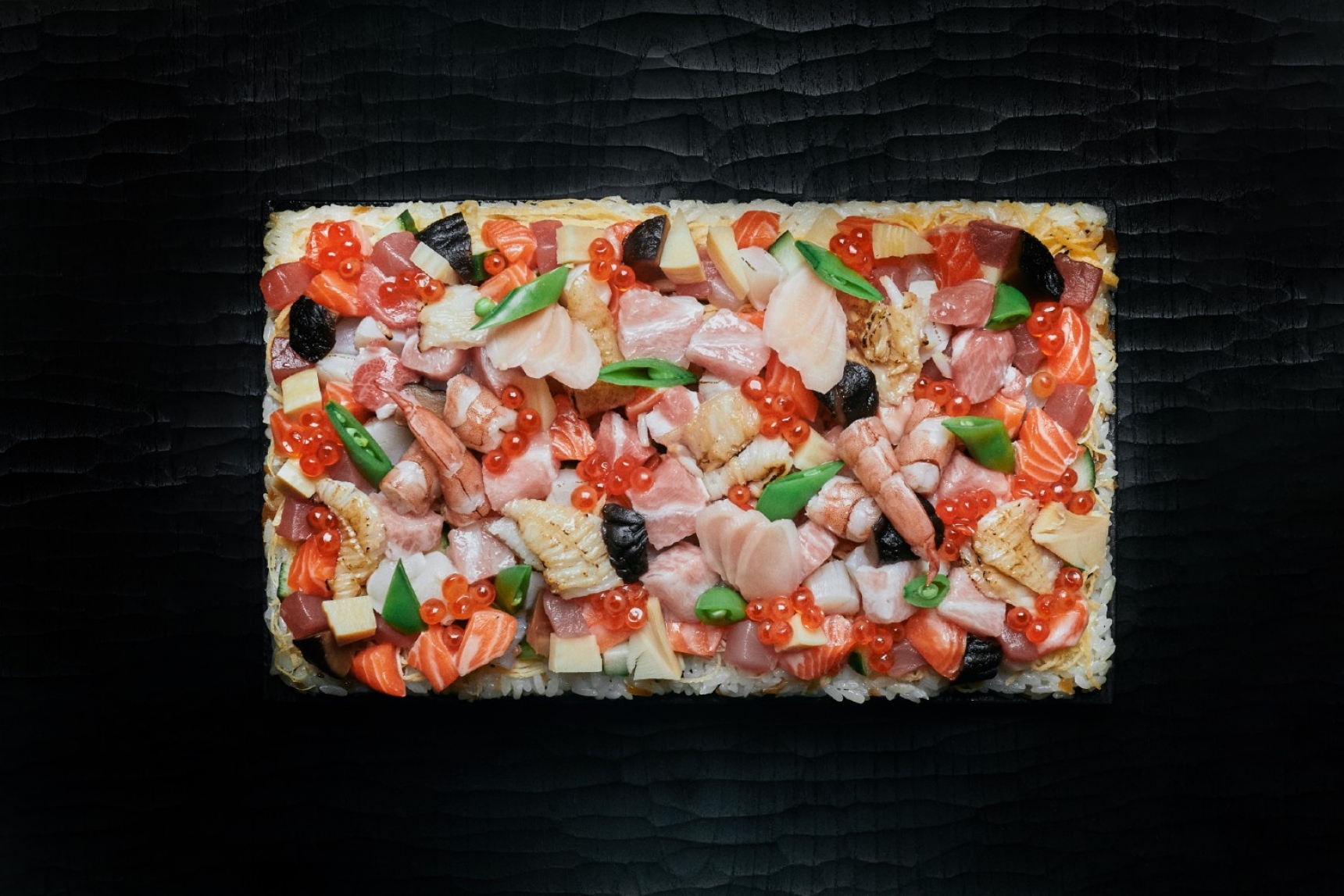 We ate a lot of food at our own dining tables this year but that didn’t stop our city’s hospitality folk from putting their best foot forward, takeaway containers be damned. These creations forced us to sit up and take notice – in some cases, they were the launching pad of brand-new businesses that we as diners are all the better for. What’s that saying about necessity being the mother of invention? Here’s to all the inventors in Victoria.

Chirashizushi, Chotto x Minamishima
Sushi at its most refined is all about that moment of connection when the morsel of food goes straight from the hand of the chef to the plate to the mouth of the customer. And yet somehow, in his lockdown collaboration with Chotto (the much-missed Melbourne Japanese favourite), master chef Koichi Minamishima managed to capture that vibrancy and immediacy in his takeaway chirashizushi. Chirashizushi means “scattered sushi”; it’s less formal than, say, nigiri – in fact, it’s a dish Minamishima’s family used to make for summer festivals back home. But in his talented hands, the “scattering” became an artful arrangement of o-toro, scallop, trout, prawn, cucumber, nori, shiitake, flounder and bamboo shoots laid over beautifully textured rice and speckled with beads of salmon roe.
minamishima.com.au

Pepes tahu, Jaen Jumah
Vegan Balinese? What? Sure, when you think Bali you (or at least we) think of roast pig. And don’t worry – Ida Bagus Palguna, Devina Wijaya and Raphael Dreki, the people who formed Jaen Jumah during lockdown, definitely ticked that box, with delicious babi merah, tumi babi, and other great tunes played in the key of pork. But they weren’t content simply raising the bar for the food of Bali in Victoria, they went one better, channelling the island’s vegetarian traditions (along with a little inspiration of their own) to craft whole menus of meat-free magic. The caramelised tempeh, rujak, and jackfruit lawar were all superb, but, whether it was served komplit with a king oyster mushroom stir-fry or simply with fragrant rice and pickles à la nasi campur, it was the pepes tahu, a moussey, silken spiced tofu cooked in a banana leaf, that really stole the show.
instagram.com/jaenjumah.melb/

Doughnuts, Holy Sugar
Honeycomb, brown butter and lemon verbena are all fair game for the sweet glazes that Audrey Allard brushes on her doughnuts and crullers. The pastry chef was working at Lune (and Laura and Pt Leo Estate prior to that) before she struck out on her own with Holy Sugar, a dessert-box business that launched in August. Each week, a handful of Melbourne households are the lucky recipient of an assortment of cakes, tarts, biscuits and slices, delivered personally by Allard. But the doughnuts are the thing. They’re airy, lightly caramelised on the outside and a vehicle for whatever glaze takes Allard’s fancy that week: maple and brown butter, chocolate, passionfruit, strawberry… the rotating line-up is a surefire recipe to keep you coming back for more.
instagram.com/holysugar_ 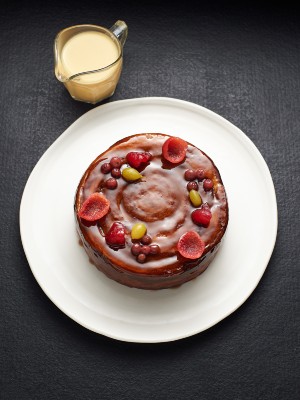 Before this deluxe croissant-cake was out of the bag, more than a few people were wondering who the hell DAVE was and why Attica kept posting strange videos of raining fruit, ribbons of cream and Ben Shewry breaking into Lune wearing a balaclava. And why call a cake Dave anyway? But despite the wacky lead-up, DAVE proved to be just damned delicious. Anchored by a round of Lune’s trademark croissant, the pastry is glazed with finger lime jam, topped with native Australian fruits including quandong, and then topped with both custard and cream. But would you expect anything less than perfection from these two Melbourne powerhouses?
attica.com.au, lunecroissanterie.com.au

There are some grand curry and rice traditions in the world, but the combination knows few greater heights than dum biryani, the Hyderabadi specialty which takes the splendour of biryani and gilds it by sealing it with dough to capture all the aromatics. We’ve never seen a dum biryani in Australia that can hold a candle to the version produced by Nabil Ansari, an OG-alumnus of Sunda and The European: the rice just so, the curry rich and fragrant, all hidden beneath a golden pastry shell jewelled with nuts and spice. It’s all the more impressive when you learn that Ansari Indian, the chef’s side hustle, got its start in his apartment when he found himself out of work in lockdown one and excluded from JobKeeper. The business took off, growing from an Instagram direct-message following to being sold through the Hotel Windsor’s takeaway platform. Ansari has returned at Sunda now and is back on the tools spearheading its new EXP project for chef Khanh Nguyen, but the memory of his biryani burns bright.
instagram.com/nabilansari 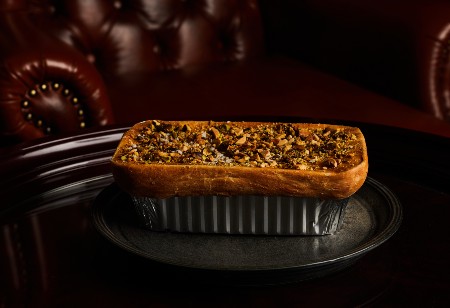 At first glance, it looks like a regular croissant. Then you notice the twinkle of a flake of salt. When you take a bite, you’re greeted with the warm and tannic sweetness that’s unmistakably honey. But the sweetness barely there, kept in check by those salt flakes and the savouriness of good butter. Baker Giorgia McAlister-Forte gets hers from the Bellarine Peninsula, where Lard Ass create cultured butter using milk from local dairy cows. It’s part of McAllister-Forte’s philosophy of baking with the very best ingredients she can find for her tiny new pastry hatch in Carlton North, and working with the seasons. Recent creations have included asparagus and goat’s curd danishes, new-season cherry and buffalo ricotta pastries, and apricots nestled in pastry filled with buttermilk and sprinkled with rye seeds.
monforteviennoiserie.com

The giant Brazilian pies known as empadão are not for the faint-hearted. And that’s particularly true of Thiago Mateus’s most impressive (and unconventional) recipe offered under the Samba Empadas line-up: the prawn moqueca. Moqueca is an Afro-Brazilian stew made with fish and occasionally prawns, along with red peppers, tomato, chilli and coriander. If you’re in the north-east of the country, coconut milk and and dendê oil, sourced from palm trees, are used in the broth. That’s the recipe Mateus uses and when you combine those flavours with a rich and crumbly shortcrust (hello, lard!), you’ve got one helluva pie.
instagram.com/sambaempadas 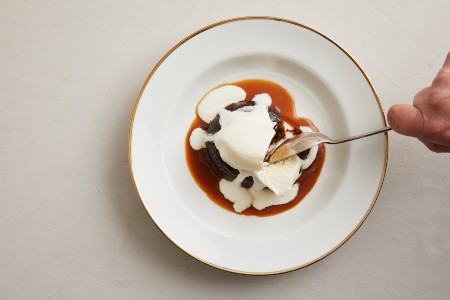 Philippa Sibley’s food delivered direct from her kitchen to your house? Do not adjust your set, this is really happening. The extreme delight of her savoury food was a delicious discovery for the many Melbourne diners more accustomed to thinking of her as a giant in the world of pastry, from the days of Est Est Est onwards. But we’d be lying if we said we weren’t just a little bit excited about getting our hands on her Tatins, strudels, blackberry sponge, tiramisù, and rose-geranium and rhubarb trifle at home, not to mention her puddings. Not for nothing is she called the Queen of Tarts.
instagram.com/ps_take3

The French influence on Vietnamese food is well known. But what about the Vietnamese influence on French food? We’d like to put forward Sunda chef Khanh Nguyen’s experiments in pâté en croûte as an ideal candidate for leading an exercise in reverse culinary colonisation. Where others taught themselves a new language during the pandemic or learned a new instrument, Nguyen decided to take advantage of his proximity to European-trained chef Rob Kabboord, then working at Lekker, to get to grips with a demanding and seriously old-school backwater of French technique. His adventures in the field of wrapping things in filigreed pastry grew almost absurdly baroque over the course of lockdown, but the example that first fired the public imagination remains perhaps his best: his bánh mì en croûte. Reimagining the traditional pâte en croûte (essentially a slab of pâté sealed in pastry) as tribute to the greatest of Vietnamese sandwiches, he produced a minor miracle of culinary leadlighting rendered in pâté, pork loaf, slow-cooked pork cheek, coriander, chilli and spring onion. Looks great, tastes better.
sunda.com.au

A yellow curry and scallop pie by Khanh Nguyen

Speaking of bánh mì, in a year packed with great sandwiches, was there a more desirable street snack than the detour into Laotian baguettes that Thi Le took at Anchovy? The brilliance here is Le’s perfect understanding of what to tinker with and what to leave alone; the sandwich is very like a good bánh mì you might encounter all over Melbourne, but by making the central filling something hot from the charcoal grill – Lao pork sausages, say, or slivers of grilled beef tongue – she turns an everyday luxury into something that’ll stop you in your tracks.
anchovy.net.au