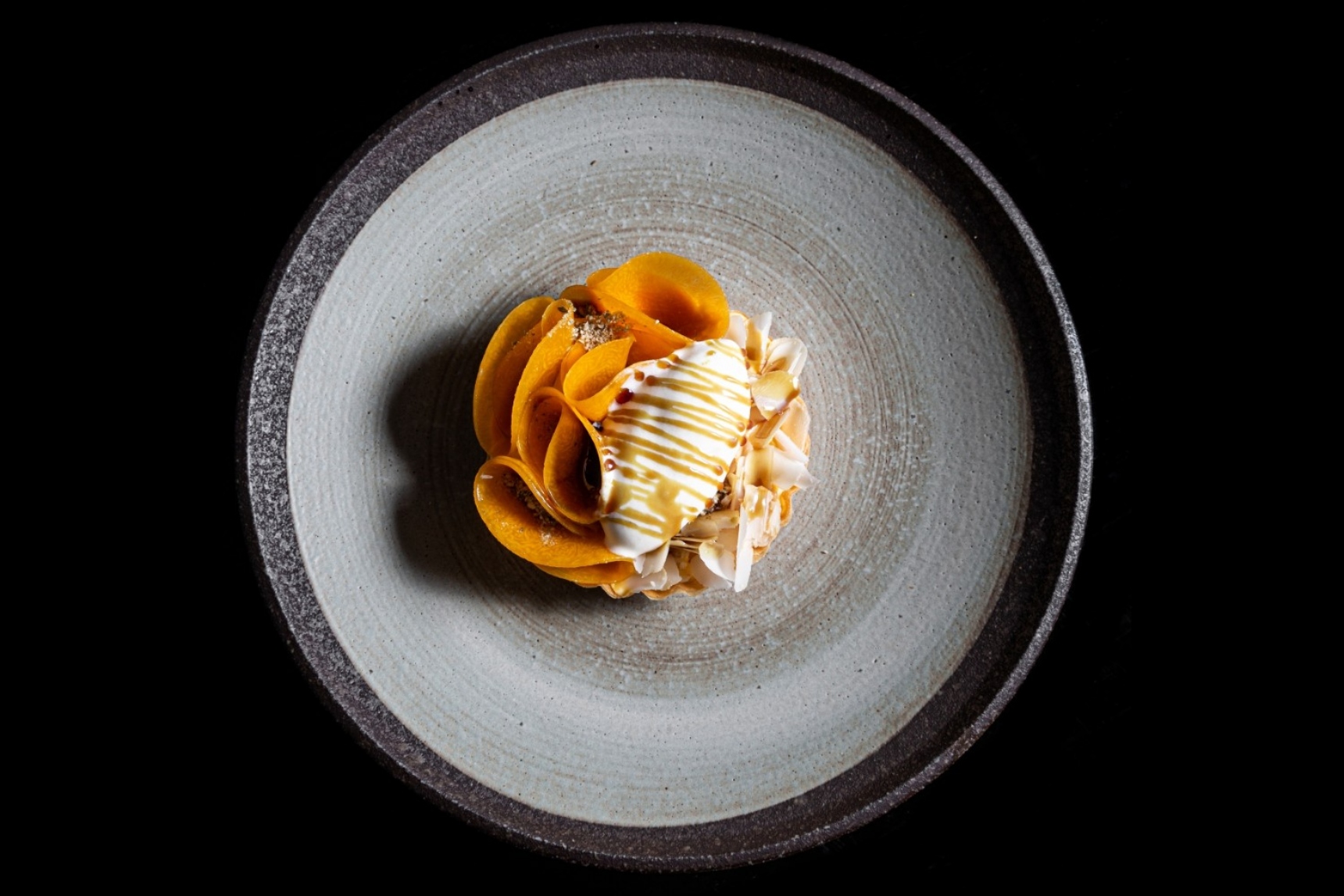 The inside word on the menu from chef Simon Tarlington.

Simon Tarlington honed his craft working under the likes of Marcus Wareing, Jason Atherton, Clare Smyth, Gordon Ramsay and Peter Gilmore, and has built a reputation for merging classic techniques with kitchen curiosity. Finding flavour in the unexpected, Tarlington takes diners on a creative culinary journey, where a respect for the feast is served with disrespect for the familiar.

“If I were sitting for dinner tonight, I’d start with the cured and smoked beef – it’s a play on a carpetbag steak, an old-school French dish, but rather than stuffing an oyster in the steak, we’re serving an oyster ice-cream on top,” says Tarlington. “I’d also order the dry-aged duck poached in master stock and served with Davidson plum, beetroot and leaves, and finish with the pumpkin pie – a hearty autumn dessert with spiced pumpkin mince and a rum and raisin ice-cream.”

Which of the dishes on the new menu best captures what you’re doing at Doot Doot Doot?
Something that really impressed me about Jackalope is that it’s very much a reimagination of what luxury hospitality can look like in a regional setting. When writing the new menu for Doot Doot Doot, I wanted to bring that sense of reimagination to life. You’ll see dishes on the menu like fish and chips, bacon and eggs, a Bolognese, fried rice, and a take on surf and turf. They’re classic, relatable dishes, but completely reinvented and presented in a way you likely wouldn’t have experienced before.

How about a drink?
A pre- or post-dinner drink in Flaggerdoot is a must. It’s the hotel’s haute cocktail bar in the property’s original homestead, and the design is pretty extraordinary, as are the drinks. They specialise in creating cocktails and have an expansive whisky list.

What if I’m here for a good time, not a long time?
There’s only one way to experience Doot Doot Doot, and that’s to saddle up for the full tasting menu. If you’re after a quick bite, Flaggerdoot has an all-day dining menu with everything from oysters, salumi and cheese platters through to salads, burgers and a ‘schnitty sanga’ with truffle mayo. Jackalope’s other hatted restaurant, Rare Hare, also offers à la carte options designed to share. While Rare Hare is best experienced over a long lunch, it’s super-casual and perfect for a quick food fix. Both venues make a mean cocktail, but it’s hard to go past a glass of Willow Creek Vineyard pinot noir sourced from the surrounding vines.

Got anything light and fresh?
Start with the Tasmanian sea treasures – sea urchins served with cleansing apple and radish. Sticking to seafood, I’d order the barramundi as my main dish; it’s cooked in paperbark to give it a smoky flavour, and while it’s meaty, the lemon aspen freshens it up. Finish with tinned fruit served with smoked custard and fennel sorbet, with a Milo crisp on top. It’s an adult adaptation of the fruit and ice-cream I’d eat as a kid.

What’s this about a wallaby Bolognese?
I learned to cook Bolognese as a child, and I’d say it’s high on most household rotations. It’s an iconic, approachable and feel-good dish. We’re not serving a traditional Bolognese, but playing with traditional flavours (rich braised meat and tomato) and creating our own play on the way it’s served. Ours is confit wallaby served with tomato jam, fresh Daniel’s Run tomatoes and a parsley tagliatelle.

I like tasty food but I don’t eat animals...
Vegetarians are well looked after with options for each course. For entrée, there’s slow-roasted celeriac with pear, juniper and a chestnut crumble. For the main course there’s a play on a takeaway fried rice, featuring wet rice on the bottom, crisped on top, served with fresh local mushrooms. We adapt a few of the dishes, like the fried rice, to vegan requirements.

Let’s go big. Let’s go crazy. What have you got for me?
It’s all about the add-ons. Start with a glass of Champagne and oysters served with apple mignonette and a barrel-aged hot sauce, and oscietra caviar served with burnt honey and truffle crumpets. You can also add a cheese course before dessert. Food aside, the most important add-on is the wine experience, where our sommeliers will take you on a vinous voyage of incredible wines, hand-picked based on your preferences and palate.

What about to close?
Yoghurt & Peninsula Honey. It’s a modified version of Milk & Honey, a dessert I created at The Highline that was an absolute favourite. This dish has some interesting textures and elements, as we balance a delicious Peninsula honey jelly with a light sheep’s milk and elderflower yoghurt mousse. On top is a lavender syrup, milk crisps and honeycomb. It works well with a sweet riesling or one of Flaggerdoot’s post-dinner cocktails. 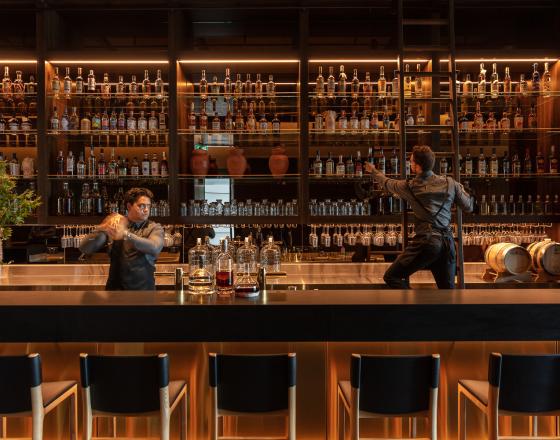 What to order at La Madonna 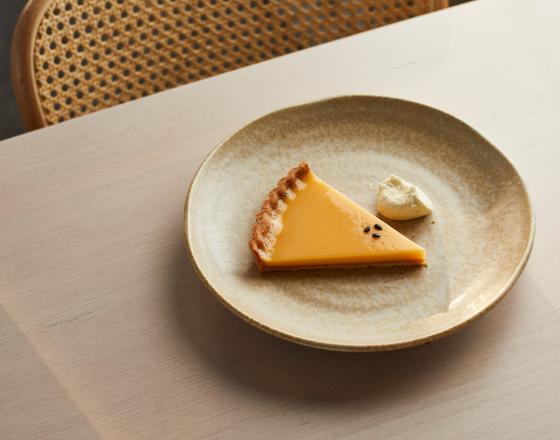 What to order at Pipis Kiosk 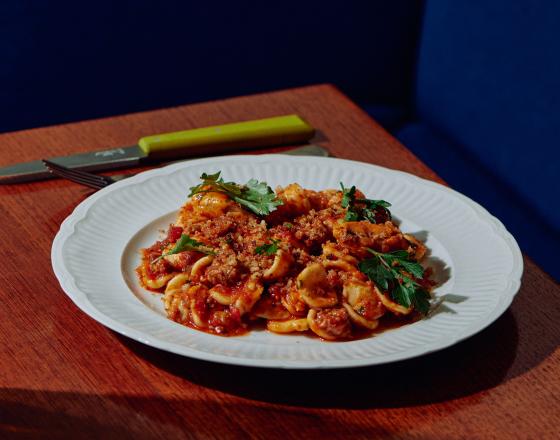 What to order at Florian