One Perfect Day: Enter via Laundry 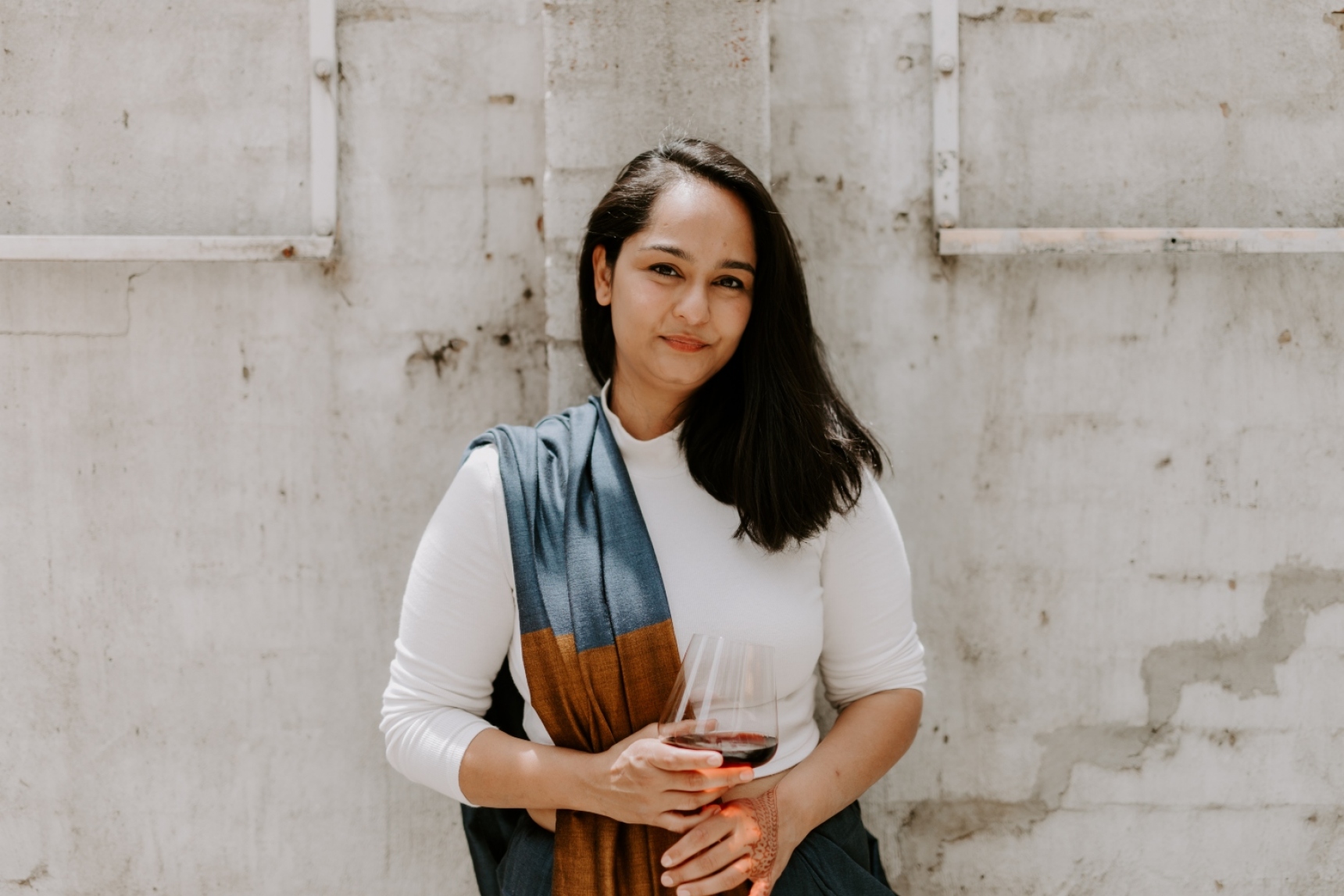 Helly Raichura is a self-taught chef and the founder of Enter Via Laundry restaurant. Her professional background is human resources, but three years ago she decided to start serving regional Indian cuisine incorporating Australian native and seasonal produce from her home kitchen, and hasn’t looked back since. She opened the doors of her dining room to Melburnians and, soon after the pandemic, started running pop-ups around Victoria to widespread acclaim, and recently joined Adam D’Sylva and Sandeep Pandit as a host of India Unplated on SBS TV.

Enter Via Laundry’s new permanent address, a fully fledged restaurant in Carlton North, promises a slightly different India to the one that drew us into Raichura’s home. “We won't be compelled to use trending techniques or plate our dishes to look like modern cuisine,” she says. Instead, the focus will be on reviving lost recipes, zeroing in on a specific region of India for several months at a time, beginning with Bengal.

It’s not fine dining, she says, but not for lack of precision. “As soon as you say ‘fine’ people expect small pretty plates with micros and multiple mains and a certain way of service. In the past our menu might have had a bit of that, but now I feel brave enough to not follow the format. I want to take my guests on a journey of this incredible cuisine that offers luxury, precision and depth in its own unique tradition.”

Here, in the first installment of a new series of columns on life in hospitality in Melbourne, we asked her to describe a perfect day in her restaurant.

A perfect day in my restaurant? Well, for one thing, I haven’t quite had a fixed place to call a restaurant for most of the time I’ve been cooking, but despite that I think we’ve been able to create experiences at locations that are special to us. A few years back, when I was still working in an office but after I’d done some stints at some restaurants, I found myself full of ideas, with a sort of adrenaline-rush need to keep cooking, and to channel that I started inviting my friends and family home to eat all the food I was having fun making. It ended up being something that would change my life.

First up I made khaman, a chickpea batter steamed to the texture of a sponge. Then I made khandavi, a delicious snack made from besan formed into silky ribbons, and called it "I am not pasta" with a little bit of attitude. A journalist who tasted it called it “Pasta not pasta”, and that version of the name stuck, so we all just went with it. Flavours native to Australia and not India became part of my repertoire. I made litti chokha, the wheat flour and besan dumplings from Uttar Pradesh, flavouring them with Davidson plum. I added sunrise lime to the burnt-cheesecake-like deliciousness that is chenna poda, and spiked the sweet, fresh cheese of my sandesh with the perfume of strawberry eucalyptus.

Fast-forward a couple of years, and the whole thing has snowballed. From cooking just for family and friends, I moved onto serving my dishes to strangers, and as things grew in popularity, we outgrew the point where people could just come to the house and “enter via laundry”, so we started serving 30 covers at a time in a gorgeous pop-up venue in Monbulk, then at Avani winery alongside Shashi and Rohit Singh’s brilliant wines. Next up, we’re settling down and calling Carlton North our new and permanent home. We’re taking over an old Thai restaurant and renovating it to become Enter Via Laundry, where we will be serving 20 guests a night four days a week. The menu will be based on regions: we’ll pick a primary region that will define mains and the majority of courses and then a secondary region to build the rest of the menu. We’re attempting to cook and serve the food as faithfully as possible, maintaining the concept, values and philosophy of the cuisine and recipes we’re cooking. Using seasonal and native ingredients is something that is essential to Indian cuisine, and so Australian natives and seasonal produce will be at the centre of it all. And, as always, our drinks menu will be all Australian.

I’ll be honest: there are times when it feels like moving EVL from place to place has come at an emotional cost. As we pack up our glasses, ceramics and drygoods and find another new home, I feel like I’m missing a sense of belonging. And this feeling is all the more acute for me because for the majority of my time living here in Australia, I’ve felt I didn't belong. But then when I went back to Ahmedabad, the place in Gujarat where I grew up, all I got there was a memory of belonging.

As an immigrant, when you migrate to a different country you accept that you might not feel at home at first but you’re always hopeful that this new country will feel like your home eventually. I came from a country that is known for its poverty, stolen wealth, rich history, and many stereotypes and misconceptions. The Australian government banning citizens returning home from India this year was a new insult, and still feels like a fresh wound to a lot of us. It took a lot longer to feel at home than I thought it would.

In the early days our struggles were real and after 13 years I still do see it quite often. Individuals being disadvantaged because of their race is something I’ve seen far too much of. It runs from instances as blatant as people assuming Indian customers at a restaurant are there to pick up food for a delivery service to the more insidious examples I saw working in HR in firms big and small, with their tick-box inclusion strategies.

For us immigrants, working harder than what is required is a non-negotiable, and fitting in means changing from the way we are to something that is more familiar to the majority population in Australia, just so we don't lose an opportunity that we are already well qualified for. And even then we’re passed over, with the culture fit or communication given as a catch-all excuse.

In my years of working as a recruiter, not being “culture fit” has been an easy excuse that white managers have used to reject people of colour, or women who are of child-bearing age. That said, at the moment supporting diversity is on-trend: corporates now have a special diversity quota to hit. So now we’re a tick box – or maybe a token – I guess.

Cooking simple things at home that represented my culture, heritage and myself gave me a way to break away from all of this. It gave me confidence and also felt that it might be a first step towards preserving the culture that means so much to me.

As I was researching and cooking all these regional dishes, finding their origins and history, I found that our cuisine in India had always evolved and had adopted so many ingredients brought in by immigrants, traders and invaders. And I got to thinking that the evolution of food doesn’t stop here. This line of thinking inspired me to bring together native Australian ingredients with Indian recipes and techniques. When I started using paperbark for my undhiyu (traditionally root vegetables cooked in earthen pot lined with leaves or barks), I felt like I was making a connection for myself with the country. I felt in tune with the produce here. I was preserving some of my own heritage and adapting to what this new land’s bounty had on offer. I felt it was a sustainable way to preserve my culture in a foreign land.

For years I was trying to fit in, but I was never ready to change and lose my Identity to be a part of a popular culture. I was now adamant that I want others to be open to differences that immigrants bring to a nation.

People have welcomed what I do, and Enter Via Laundry has taken off. But as much as the welcome warms my heart, there’s an element of sadness there when I think of all the compromises that had to be made by other cooks here. It makes me sad to think it’s taken so long to get to a point where the kind of cooking I want to do is accepted.

In Australia and many other countries our food has been modified for years so that it is palatable to the general population, our menus are often limited to cheap crowd-pleaser dishes and most of the traditional dishes are only served in home kitchens. I wonder if we just didn’t feel welcome enough to cook what's ours and instead cook what’s expected of us. Perhaps if we had challenged the stereotype, today we’d see fermenting idli batter as popular an ingredient in hip restaurants as sourdough or koji, and eating with your hands in Indian restaurants as much a marker of cultural fluency as eating nigiri with your fingers at a high-end sushi bar.

Hospitality is one field that has set an example when it comes to celebrating differences and I am so glad I made this switch. The camaraderie in this industry is remarkable: an appreciation for the unspoken language of tasty food is all you need to be part of this universal culture. But there’s more we can do here. Let’s not just stop at dining at multicultural restaurants to show inclusiveness and curiosity. Let’s truly be modern, inclusive and aware. Don't make us a trend to bank on; accept our genuine immigration stories. Let’s stretch that curiosity at workplaces, schools, universities, parliament and more.

When we educate ourselves across cultures our misconceptions, taboos and insecurities fade. Evolution, innovation and creativity come when we work together, and to work together we need to be inclusive of all Australians, and not stick to just the handful of privileged ones. This country is lucky to be made of immigrants willing to leave their homes and bring their skills, values, culture, art and heritage to live in and give to the greater good of the nation.

Enter Via Laundry is not just a place where I cook. It's where I found home here in Australia. It took me 13 years and a complete change of profession to find it. I wish it hadn’t taken me so long, that I hadn’t wasted my time, and that I hadn’t had to nearly lose my sense of home completely before I could get it back again. Most of all I wish the generations to come can truly and freely enjoy, relish, cherish and carry forward their heritage and be proud of their different cultures and their practices, without the need to sacrifice aspects of that culture to find opportunities and acceptance. That for me is a perfect day. 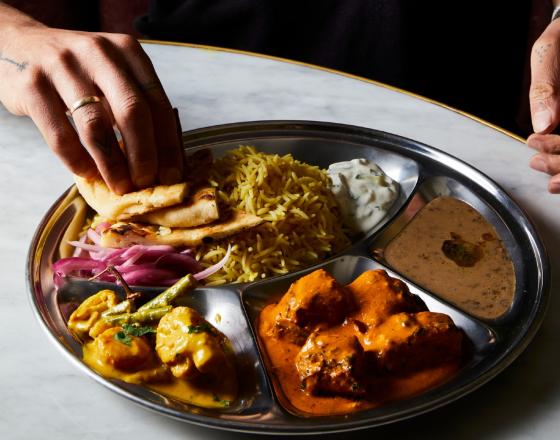 What to order at Maha Bar 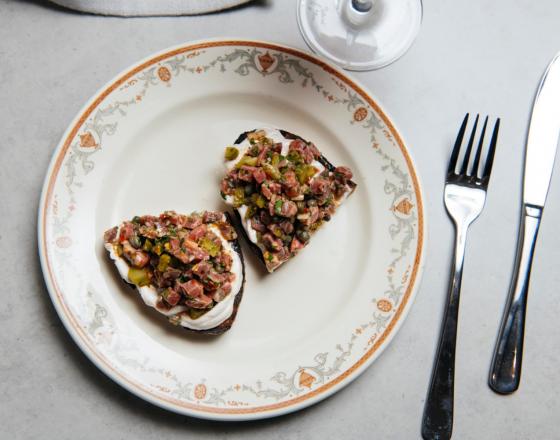 What to order at Hazel