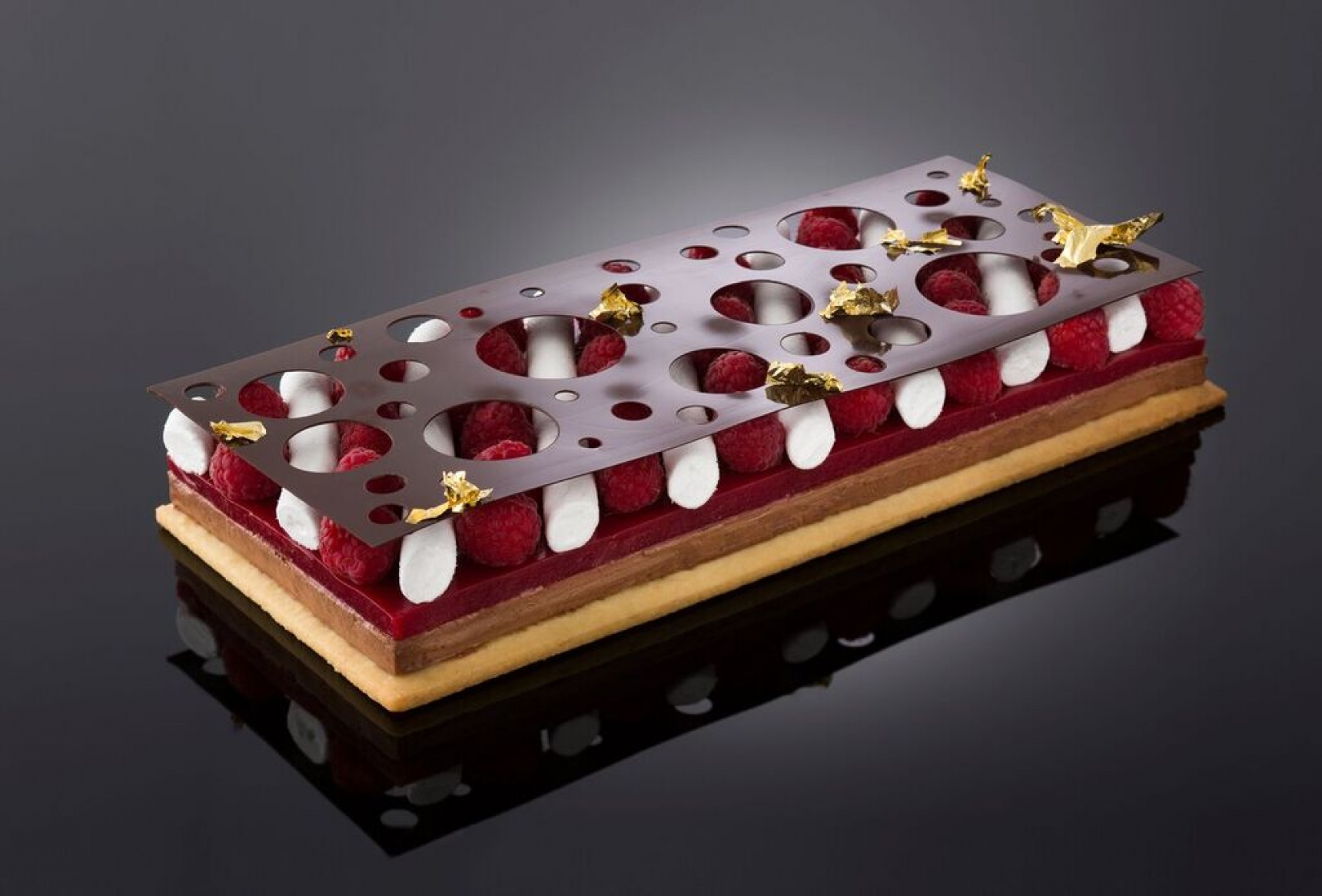 Kirsten Tibballs shares the recipe for Midnight, a headturning dessert where chocolate, raspberry and coconut play together. Tibballs demonstrated this dish at Masterclass supported by Sanpellegrino during the 2019 Melbourne Food & Wine Festival.

2. Preheat the oven to 160°C. Roll out the chilled pastry to a thickness of 3mm. Cut out three 25cm x 10cm rectangles and place on a Demarle Silpain mat on a perforated tray. Bake until golden-brown (15 minutes). Dust with the cocoa butter when it comes out of the oven and allow to cool.

3. For the raspberry jelly, soak the gelatine sheets in a bowl of cold water until softened. Squeeze the excess water from the gelatine sheets and mix with a third of the purée and the sugar in a saucepan. Heat the mixture to 60°C, then mix in the remaining purée. Pour the mixture into a 24cm x 35cm half-size Demarle Flexipat or a lined tray of similar size and freeze. Once frozen, cut into three 24cm x 9cm rectangles and return to the freezer until required.

4. For the chocolate mousse, soak the gelatine sheet in a bowl of cold water. Semi-whip the cream and refrigerate. Melt the couverture in the microwave to 60°C. Combine the sugar syrup and egg yolks in a double-boiler and whisk until the mixture reaches 80°C to form a pâte à bombe.

7. Pour the mixture into a half-size Demarle Flexipat and freeze. Once frozen, cut into three 24cm x 9cm rectangles and return to the freezer until required.

8. For the marshmallow, roll sheets of baking baker into tubes of 2cm diameter and secure them with sticky tape. Fill a jug to halfway with sugar to hold the marshmallow sticks upright.

9. Soak the gelatine sheets in a bowl of cold water to soften. Combine 300g caster sugar, the dextrose, vanilla seeds and 130ml water in a saucepan and bring to the boil, stirring to dissolve the sugar. Remove from the heat. Squeeze the excess water from the gelatine and mix into the sugar mixture.

10. Warm the liquid glucose in a microwave, then transfer to a stand mixer. Whisking on high speed, slowly pour in the sugar mixture, ensuring you don’t hit the whisk. Continue whisking on high speed until the mixture reaches ribbon consistency. Transfer the mixture to a piping bag and pipe into the prepared tubes. Stand the tubes in the jug of sugar and leave for at least 1 hour at room temperature to set.

13. Spread a thin layer of chocolate onto a flexible plastic sheet with a PVC pipe. As soon as it sets, cut three 24cm x 9cm rectangles, place a flat tray on top and place in the fridge for 10 minutes or leave at room temperature for an hour.

To make sugar syrup, mix equal parts caster sugar and water, and bring the mixture to the boil to dissolve the sugar. Remove it from the heat and cool it before use.