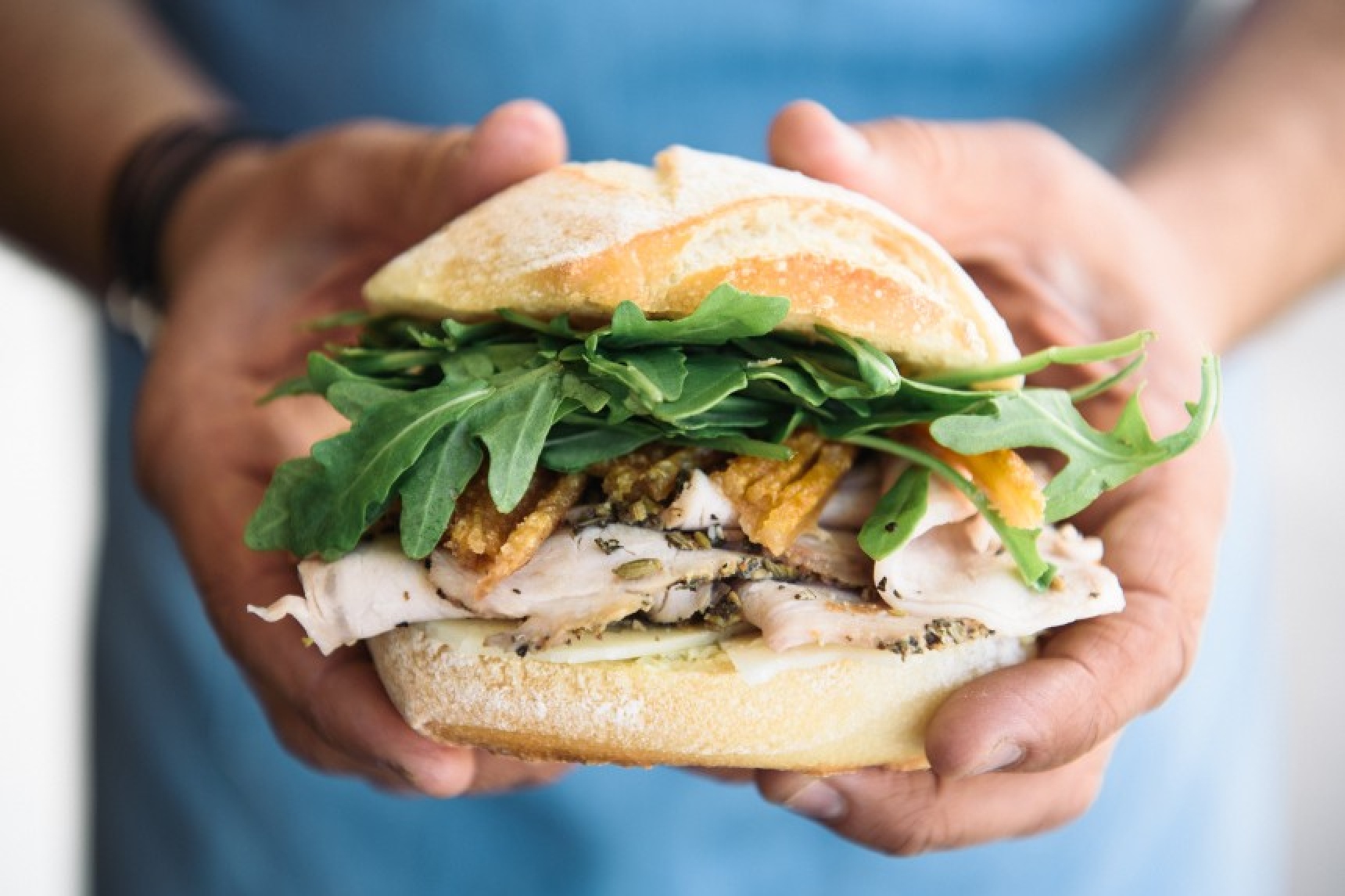 Can’t look at another sushi roll? There’s much more exciting lunchtime fare to be had in Melbourne’s CBD that won’t break the budget, whether you’re a diehard ramen fan, a sucker for a spicy noodle soup, or looking for lunch you can eat with one hand. Here are our picks of the best midday bites in Melbourne city for under $15.

Do you Chongqing? Some people can’t go past a bowl of pho or ramen when the craving for a noodle soup strikes. But if you’re a fan of heat, funk and complexity in your food, Chongqing noodles are where it’s at. Hailing from the Chinese city of the same name, the hallmarks of this dish are copious amounts of Sichuan chilli oil, the pop of roasted peanuts, numbing Sichuan peppercorns and, of course, noodles, in this case wheat. But the rest of the dish is open to variation: some versions come with minced pork, others with yellow split peas or braised beef. We recommend the beef for a little extra heft to go along with the bok choy plus there’s something comforting about beef in broth. The only decision left is whether you’ll go for mild or spicy soup.

There’s one thing to know about Miznon: this is a restaurant that doesn’t play by the rules. Israeli street food is the cuisine, on paper at least, but don’t expect the usual array of falafel, hummus and salads. There are pitas bursting with lamb spare ribs. Another, called Deep Satisfaction, contains brisket and mozzarella. One dish is simply called A Bag of Green Beans. But the reason you’re here - at lunch time at least - is for the pitas. There are plenty of options that hover around the $15 mark, but our pick is the roasted cauli and tahini number that goes by the name White. Don’t be fooled: this deeply savoury pita, overflowing with lightly charred florets of cauliflower and underscored by chilli, is anything but bland. 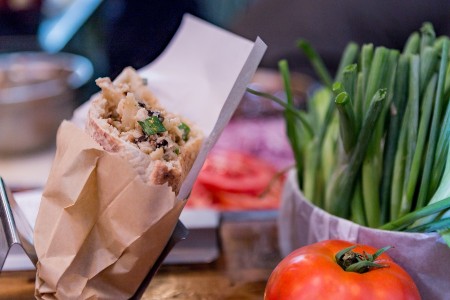 It’s possible that Dear Fry Day, a restaurant selling skewers of everything from deep-fried quail eggs to prawn dumplings, was invented for the Libras of the world, never quite sure what they want. But whatever sign you were born under, building your own bucket of skewers at Dear Fry Day could be the cheapest thrill you’ll have any day of the week. Starting at $1.80 per stick for things like potato, eggplant or lotus root, the Fry Day menu ramps things up to $2.80 when you add meat to the equation. Choose from the less-often seen chicken hearts or Taiwanese sausage or head for the familiar comfort of pork belly, lamb or crab sticks. Then it’s time to choose your sauce. Sichuan fanatics will spring for the ma la (numbing and spicy) glaze, but there’s also sweet chilli, cumin, sweet and sour, a mild chilli and an extra hot. All those choices make for an extra-large fan base, though, so be prepared for a wait at busy periods.

It’s hard to argue against porchetta as the clear front-runner in the hot rolls stakes. Saluministi take their porchetta seriously, roasting a whole belly and loin from Valenca Free-Range each day for more than four hours, with fennel, rosemary and thyme giving the meat its flavour. Once it’s out of the oven, the porchetta rests for about an hour to ensure utmost juiciness. Then it’s sliced and stuffed into ciabatta rolls, along with a paste of artichokes and olive oil, with some pecorino Romano and rocket the finishing flourishes. It sounds hefty, but as co-owner Peter Mastro says, “it serves one, and you won’t want to share it I promise.”

Soi 38 serves all kinds of noodle soups and dry noodle dishes, but the boat noodles are the rightful signature, the broth rich in galangal and lemongrass, slowly simmered meat and springy noodles. The best bit about Soi 38, though? You’ll be eating lunch in a corner of a CBD carpark, along with a buzzy huddle of other diners in the know. It doesn’t get much more Melbourne than that. 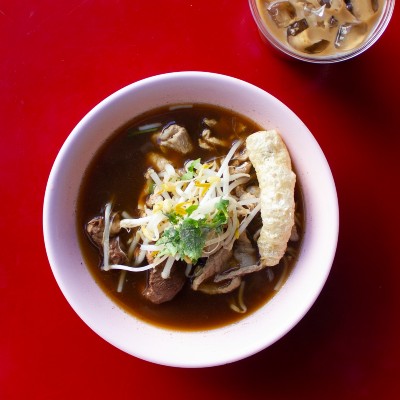 Finding any meal in the city for less than $10 is a reason to celebrate. But when it involves crusty bread, hunks of smoky, charred pork shoulder, a bed of crunchy pickles and cucumber, and all the banh mi accompaniments (chilli, pâté, coriander) tweaked just to your liking, it’s pure joy in a paper bag. N. Lee has been doing its thing since 1991, with the original store in Collingwood still going strong. Lucky for the CBD’s office workers, the owners added not one but two outposts at either end of the city, so you’re never far from a great banh mi.

When a world-famous ramen shop opens a separate branch devoted to its chicken broth, you know it’s going to be good. The laser-sharp focus at Hakata Gensuke’s QV location is best seen in the signature tori ramen, a simple-seeming bowl adorned with spring onion, bamboo shoots and chicken chashu. But the proof is in the broth. Tori ramen has that same mouth-coating quality as tonkotsu, the pork bone broth that’s most familiar to Australian ramen fans, but it’s also lighter and more comforting, like a concentrated version of chicken noodle soup. It’s made in a similar fashion to tonkotsu, slowly simmering chicken bones over many hours until they break down, then reducing that liquid to a rich and unctuous soup. It’s not quite as rich, though, which is welcome news in warm weather.

A diner that advertises itself as being a 24-hour operation might not immediately spring to mind for workday lunches. But when the craving for a good burger strikes, there’s no better address than a Con Christopoulos establishment, where the classics are taken seriously. The Butcher’s Diner cheeseburger features a grilled 160-gram beef patty, topped by a slice of aged cheddar, accompanied by long slivers of dill pickle and both tomato sauce and mayonnaise for extra excitement. Cheeseburger purists might baulk at the iceberg leaves and rounds of onion and tomato, but it is lunchtime after all - you don’t want to fall asleep at your desk. Or maybe you do, in which case, you’re in safe hands with a list of half-bottles perfect for the solo diner and close to a dozen beers.

Not that you would know it, but when you sit down to a bowl of pho in Melbourne, chances are you’re enjoying a recipe that hails from southern Vietnam, a recipe that many from the north of Vietnam, where pho originated, consider to be a deviation from the real thing. Hanoi-style pho is typically more restrained, with a subtly flavoured broth and no herb garnishes, just spring onions and onions – and definitely no bean sprouts. Pho Thin is one of the few restaurants in Melbourne to offer Hanoi-style pho, but even this restaurant has its own twist on tradition. The beef is stir-fried with garlic before being added to the soup, adding an extra dimension of flavour. You can also add quay, deep-fried dough sticks, on the side to soak up the broth. Don’t they say rules were meant to be broken?

How can you go past a dumpling that’s an ode to your city? Shandong Mama is perhaps most famous for its mackerel dumplings, ethereally light and particularly excellent in their pan-fried form. But the Melbourne dumpling – a mix of chicken, chopped prawn, calamari, mussel and fish enlivened by lemon and parsley – is just as worthy of your attention. All the dumpling wrappers are made by hand at the restaurant, with the thickness of each tailored to fillings that range from traditional Shandong recipes where seafood reigns supreme to those that have been tweaked to suit an Australian palate, such as the lamb dumplings and, yes, the Melbourne. Think of it as a lighter, lunch-worthy take on surf and turf.

This article is presented in partnership with City of Melbourne.