Where Matt Preston Likes to Eat in Melbourne

You’ve seen him on MasterChef; you know his cravats and suits are louder than a live music festival; now you can eat where Matt Preston eats as he shares his little black book of Melbourne dining.

The food journalist, TV host and author has been busy working on his sixth cookbook, Yummy, Easy, Quick Around the World, which puts a fresh spin on the recipes we typically turn to on weeknights. Encouraging you to toss out the take-away menus, Preston delves into the cuisines of 11 of the world’s great food cultures for fresh inspiration. From India to Italy, the book contains plenty of achievable dishes for the home cook such as chilaquiles, kakavia and coq au vin.

We asked Preston, a past creative director of Melbourne Food & Wine Festival and one of its most passionate supporters, for his Melbourne dining hit-list, as well as a recipe for Calabrian lasagna from the book.

Why is Calabrian lasagna better than the traditional version from Emilia-Romagna?

It’s not; it’s just different and a bit less time-consuming to make. Think of it as the “meatlover’s pizza” of the lasagna world.

Where do you go for the best lasagna in Melbourne?

It’s not something I go out for, it’s a dish I make at home.

Where do you go in Melbourne for your favourite coffee?

I drink builder’s tea – strong, milky, no sugar and ideally made with PG Tips or two bags of Blue Label. If I do need a coffee it will probably be drunk at Master of None, Fergus or 30 Mill.

It depends what I feel like. I’ll go to 400 Gradi in Brunswick for Neapolitan-style. Johnny di Francesco is a gun who keeps the true flame burning. Otherwise, Mamma Mia in Glen Iris because it’s local and Sammy is one of the original pizzaiolo of Melbourne with a pedigree going back over 50 years. I also like this more Aussie style of pizza.

Andrew’s. It’s a long- running tradition for me and mine and they never fail to put a smile on my face. The burgers are always better than you remember them! Plus the place is wonderfully free of any of that new-wave, burger-franchise wank. It’s just photos of Greg with a selection of old footballers and fading TV stars.

The degustation at Lune Croissanterie is a pretty special way to start the day! Otherwise I’ll head to The Beatt or Serotonin Eatery or, at the other end of the spectrum, Millstone or Gilson, depending on how virtuous the person I am meeting is!

Embla – love that bar, love the food and love the advice.

Lui Bar if I’m showing off, as the cocktails are very correct and the view is as luxe as they come. Then there’s Lûmé, home to world’s best bartender, Orlando Marzo, who does amazing things without alcohol too. I’ve been going to Madame Brussels for so long it feels like home; I love Bar Liberty because Banjo [Harris Plane] is a prince; the Attic above Black Pearl – I could go on and on. We have an amazing selection of great bars in this town!

Where do you go if you feel like a blowout?

Amaru. Sure it’s modern, sure it’s occasionally a little crazy but that’s never at the expense of being tasty, tasty, tasty. It’s also mercifully free of expense account diners talking about how great they are.

How about a cheap eat?

Flemington or Footscray for pho, brunch, laksa, fried kuay teow, rice paper rolls, whatever – but these are our secret hideouts so I’m not sharing!

Shira Nui sushi bar. You take a seat at the counter and let Hiro [Nishikura] do his magic. He was a master with the blaze back when few others had caught on, but then he’s usually doing something unique here. Never go with more than two others!

Igni. It’s easier to get a booking there than at Brae and it’s a shorter drive than Provenance, Pt Leo Estate or the Royal Mail (all of which I love). In fact, add gems like Captain Moonlight, Cape at the RACV Cape Schanck Resort and Ballarat’s Underbar and we’ve never been better served with great restaurants in regional Victoria.

Complete this sentence: Melbourne is Australia’s finest food city because…

Of the people that live, work, cook and eat here.

Tell us about the most memorable moment in your time as the Creative Director of the Melbourne Food & Wine Festival?

Persuading the Langham Hotel to support the return of MasterClass, as well as the international luminaries that we’ve persuaded to come and demonstrate over the years – so many of my heroes then and still! I need to acknowledge the amazing work of Ute Biefang in breathing life into this event, and the vision of the Langham’s Katie Benson.

Involving Victorian chefs in hosting and selecting the international talent they wanted to work with as part of the Festival. Taking these international chef events out of sterile hotel ballrooms and into Melbourne’s best restaurants.

The success of the Spice Market nights that celebrated Middle Eastern food at a time when there was so much anti-Muslim and anti-Arab sentiment. When 2,500 people came on the first night, we knew it was an important event. Event manager Anne Houlihan must take the majority of the credit for this.

The amazing Gala Dinners that Crown created for the Festival at the Prahran Market, the North Melbourne Meat Market, Shed 14 in Docklands and so on. These are still the most spectacular Festival dinners anywhere thanks to Walter Wagner and his team at Crown.

What is your best childhood food memory?

Picking tomatoes for dinner in my grandfather’s greenhouse at the end of a hot summer’s day. The smell of that hothouse was intoxicating. I must have been three or four. Today, the smell of tomato leaves can take me right back there.

Tell us about your all-time best international food experience.

Travelling with the woman I love and eating at the five best restaurants in the world in 2009 – the year after I left the Festival. El Celler de Can Roca, Mugaritz, El Bulli, Noma and The Fat Duck represented places that would all be hugely influential moving forward. Other than the Roca brothers, the Festival had been involved in bringing every one of them out to Australia. 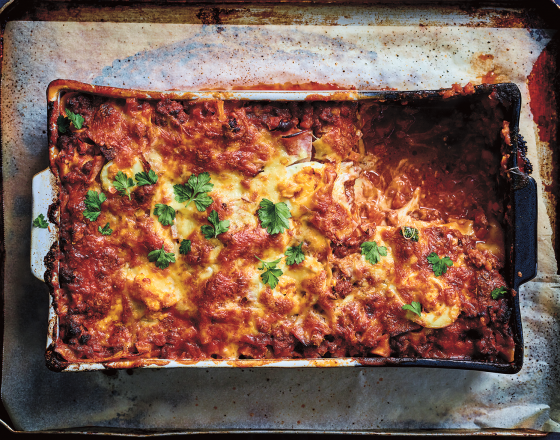