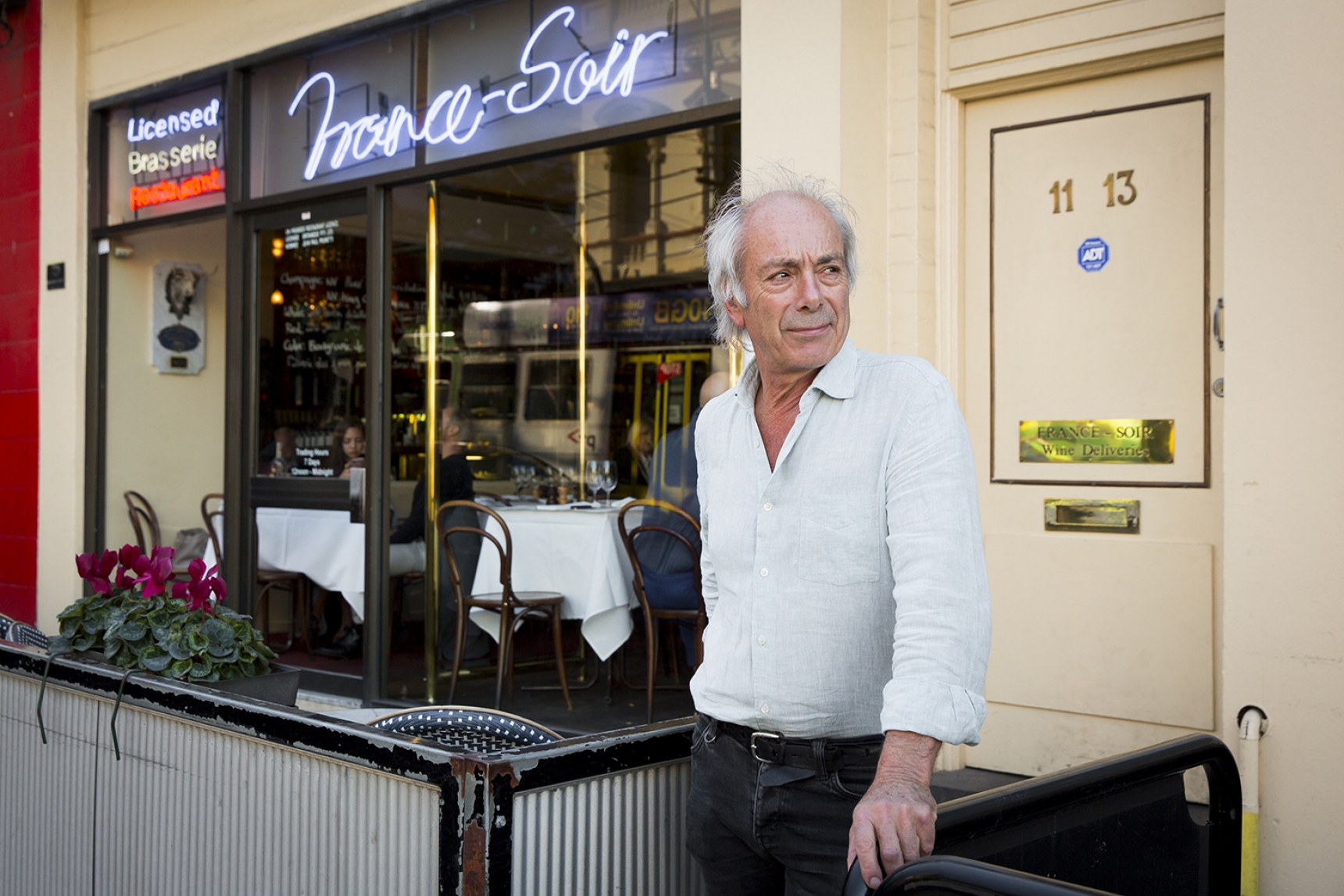 Next up in Decoding, our series that delves into the stories behind Melbourne’s dining rooms, we visit France-Soir, the South Yarra establishment that’s been serving wine lovers for 33 years, outliving fusion cuisine, deconstructed plates and countless other fads in interior design and food. The dining room still heaves night after night with generations of diners side by side at the white-clothed tables. Sitting among its mirrors, brass and wood, you get the sense that the restaurant has only improved with time.

Over its 33 years, France-Soir has been the backdrop to deals done, anniversaries toasted, first dates that turned into the second and third. Stepping inside is like embracing an old friend: you immediately feel at ease. It’s one of the reasons the restaurant is so beloved by its (many) regulars, several of whom say hello to Corsican-born owner Jean-Paul Prunetti as they walk past, shaking hands and dropping off bottles of wine for dinner that night.

Prunetti opened France-Soir with several business partners and a thousand dollars in the bank. Today he’s the sole proprietor of one of Melbourne’s most treasured restaurants and is there most days of the week, either working on the floor or behind-the-scenes to make improvements.

Artwork is taken down and replaced; objects found in Paris flea markets are added to the shelves behind the bar; Prunetti has even experimented with farming cattle to service the restaurant’s many orders of steak frites each week.

But the neon sign has remained untouched. Installed in 1986, it’s gone from en vogue to passé to achingly cool again. Today, it’s a beacon on Toorak Road, inviting weary travellers inside for  Champagne, duck a l’orange and an experience that’s Frencher-than-French.

“After 33 years I didn’t think I’d have that much to do but still today I’m as busy as ever, trying to work things out,” he says. “I always think we can do better. I don’t like to be bored.”

“We decided to do a neon sign, which was not in fashion at the time, but now it has become a bit more popular, people have neon signs everywhere. France-Soir is the name of a newspaper. I wanted something to sound French but I wasn’t sure. It took me a while to find it and then suddenly it clicked. It was a very famous newspaper. They changed the front page six times a day. Every three hours they had a new edition out there. Then about 10 years ago, the guy of the newspaper rang me and he said you’ve got the same name as our newspaper. He said it’s funny because when we click France-Soir, it’s your website coming first before anybody else. Well, I said, I didn’t do it on purpose, it’s not me. Anyways, he never rang back. They went broke after that.” 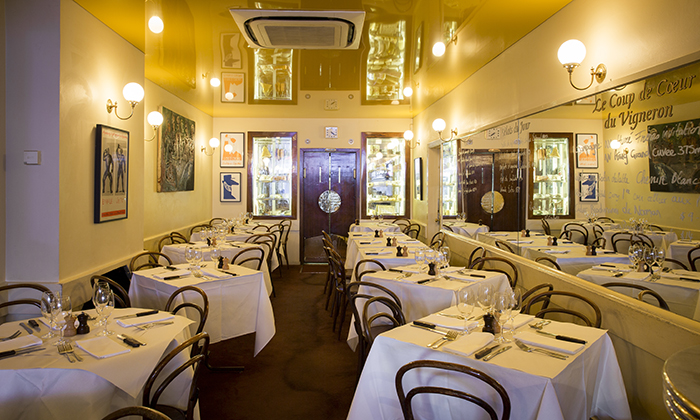 “From the beginning we started writing the menu on the mirrors. That’s a very French bistro habit to write the wine and the specials of the day. Because we have a menu that doesn’t actually really change. The dishes we started with are still on, we’ve just added others. So we need something for the people who come a lot. We’ve got customers who come every two or three days. They need the specials for lunch. They get bored with the same menu. But funnily enough, those people still order from the regular menu.”

“It’s called a torche in French. This lady is in bronze. It’s a pair. She and the male were outside a hotel in Paris. I bought them from a French antique dealer in Paris who’s a friend of mine. The male version is in a warehouse at the moment; I haven’t found another spot to put him. It’s important to keep everything workable.” 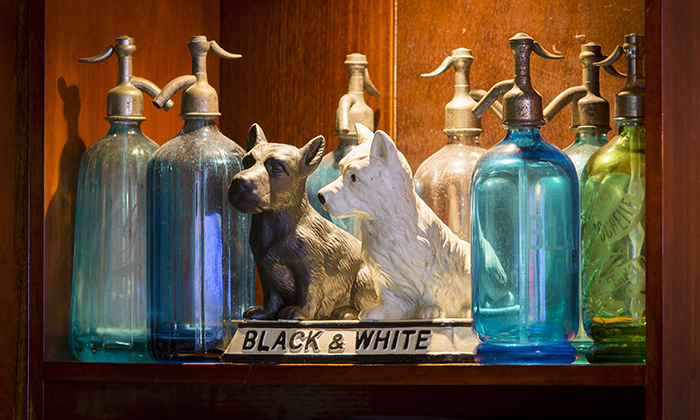 “I just bought that on my last trip, about three months ago, from a flea market. The dogs are from Black & White, the whisky. I’ve got two dogs that almost look the same too: Issy and Teddy. They’re wire fox terriers, but I think these ones are Scottish terriers.”

“A lot of the posters I’ve had for 10 or 15 years. But I came back from France recently and I decided to change it. I wanted to put in a bit more colour; the others were a bit dull.”

“With a lot of them I try to focus on everything to do with drinks. The chenin one is good. It’s [based on] Charles de Gaulle originally, and then they put chenin in his mouth.

“[The cabinets are] only two years old. It used to be two cupboards full of old dirty bottles, trophy bottles. But I was a bit sick of it, of the dust on the old bottles, and I decided to put a bit of life down there, so I put the cheese on one side and charcuterie on the other side.

“Basically there’s not one corner I haven’t touched over the years.”

“That’s a Corsican head. It’s a jug for Casanis, which is like Pernod or Pastis. Casanis is another brand, made with different herbs.” 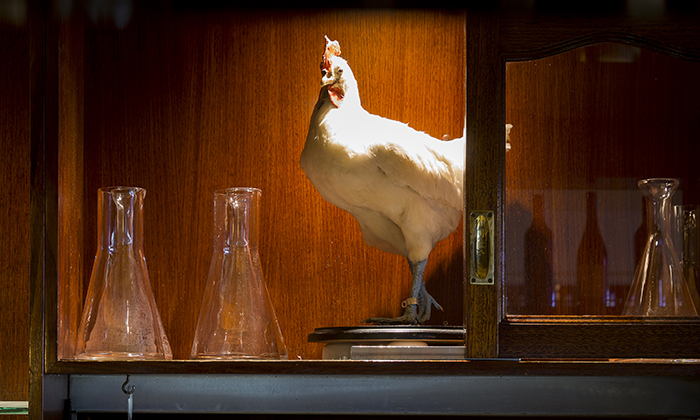 “That’s a Bresse chicken. About five years ago, I got involved very seriously in trying to bring the Bresse chicken to Australia. The eggs were here, they hatched, but at the last minute the Department of Agriculture decided they had some kind of disease, which has never really been proven, but it happened and they destroyed the lot.

“This is a chicken which is not from that batch. When I went back to France last time, I asked someone to do it for me, so I’ve still got one here. Poor consolation but hey. This is a memory. A very deep memory, a sad memory, but a memory anyway.”