Thousands of restaurant tables are coming to Melbourne’s CBD in a new drinking and dining program covering the city’s streets.

The New Year Street Feasts initiative takes some of its cues from the piazzas and squares of Europe, opening up precincts all over the City of Melbourne, including some of the city’s most popular eat streets such as Flinders Lane and Little Bourke Street.

From the Paris end of Little Collins Street right through to Hardware Lane and beyond, each precinct will bring together restaurants and bars from the surrounding streets and lanes, offering diners more than 50 venues to patronise on 31 December and 1 January.

“Initiatives like these are very important to bring back people to the CBD and to showcase international cuisine on our beloved Melbourne laneways,” said Jessi Singh, chef and owner of Daughter In Law and bar Mrs Singh’s.

“It's about coming together,” said restaurateur Joe Mammone, who owns Marameo and Il Bacaro in the city and Bar Carolina in South Yarra. “There's no other place like Melbourne when it comes to food and culture, and I can't wait to see the resilience and creativity our hospitality industry has shown this year channelled into reactivating the city we live in and love.”

With social distancing in place, the city announced today it is unable to stage its annual New Year Eve’s fireworks celebration.

Instead, council is opening up additional dining space in the CBD and encouraging you to book a table and come into the city to visit a favourite restaurant or try somewhere new. Music and other activities will complement the outdoor dining program.

“This has been an incredibly tough year and we want to mark its end by celebrating Melbourne’s wonderful cafes, bars and restaurants,” said Lord Mayor Sally Capp. “This is a fantastic opportunity to celebrate everything we love about our city and thank every Victorian for pulling together to combat this deadly virus.”

Booking New Year Street Feasts in advance is essential to keep the celebrations running smoothly and safely. More details on travel to and from the city will be released in the coming weeks, along with the full list of dining precincts and participating restaurants.

All bookings for restaurants will open on Monday 23 November, with limited seats available.

For all announcements on New Year Street Feasts and to get first access to purchase tickets, sign up to MFWF’s news. 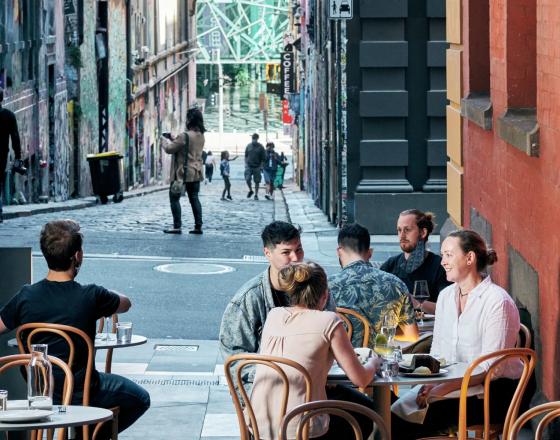