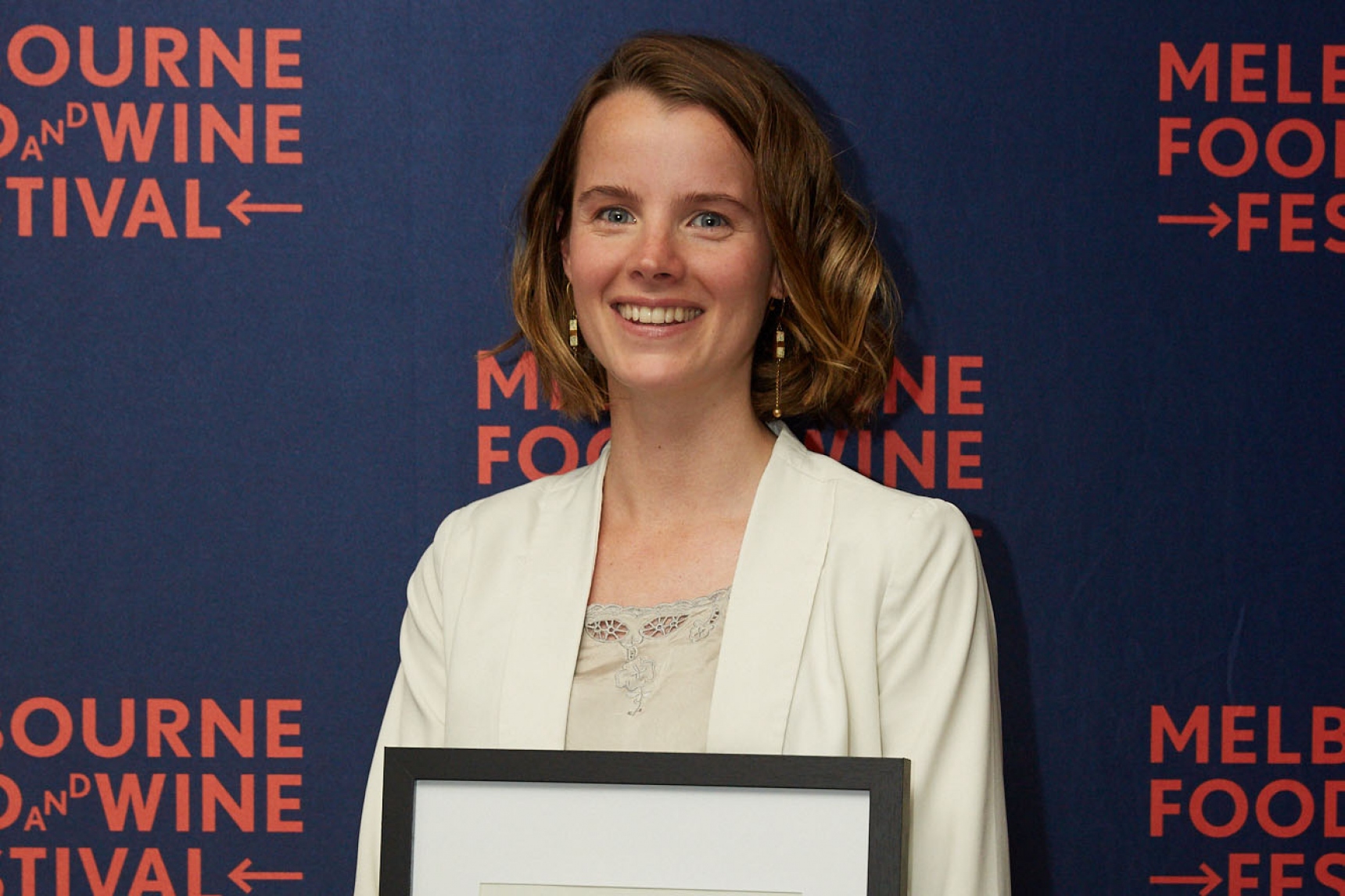 From a field of nearly 200, a rising front-of-house star took home one of Australia’s leading hospitality prizes last night. Her ambition? To promote hospitality as a long-term career choice, especially to those with families.

A young front-of-house professional with a vision to make her industry more attractive to those with families won the 2019 Hostplus Hospitality Scholarship last night in a glamorous event at The Esplanade Hotel in St Kilda. Julie Davaine, general manager of four venues in the Merivale group, took to the stage to accept the award from MC Jill Dupleix in front of a crowd of 110 hospitality luminaries.

“One of my biggest priorities in my businesses is how I’m going to support people with families,” said Davaine. “How do I create flexibility in their work life to give them the career they deserve so we don’t lose all this talent?”

The evening was the culmination of a four-month process to find Australia’s next generation of hospitality talent, with close to 200 applications received from people aged 22 to 35 working in all areas of the industry. Applications were reviewed by a judging panel that included some of Australia’s biggest names in food and drink: Neil Perry, Guillaume Brahimi, Gail Donovan, Shane Delia, Fleur Studd and Anthea Loucas Bosha. This year’s runners-up for the Hostplus prize were Laura Dyba, restaurant manager at The Agrarian Kitchen Eatery, just outside Hobart, and Saba Alemayoh, owner/manager at Saba’s Ethiopian Restaurant in inner-city Melbourne.

Davaine, as winner of the Hostplus Hospitality Scholarship, receives an all-expenses paid trip to three countries to gain work experience at three businesses of her choice. Upon her return to Australia, Davaine will continue to build on her industry experience over a year-long mentorship with a local industry leader.

"The lovely thing about tonight is we have so many legends with us, but also the next ones: the rising stars," said Dupleix.

From a strong field, Davaine was the standout. Growing up in Paris she developed a passion for hospitality when she was working at a brasserie while studying theatre and arts. Determined to push herself outside her comfort zone, she moved to Sydney with just a suitcase and a few words of English. Ten years after joining the Merivale group as a food runner at Sushi E, Davaine is now general manager of The Paddington precinct, overseeing four celebrated hospitality venues (Fred’s, Charlie Parker’s, The Paddington and The Chicken Shop) and more than 150 employees.

“I couldn't be more humbled to feel like I'm a part of this country and this community today,” said Davaine. “You give me a chance that is a once in a lifetime chance.”

The judging panel was particularly impressed with Davaine’s style of leadership and her desire to shape the future of Australia’s hospitality industry. She is passionate about creating a supportive working environment while ensuring career progression opportunities are equal for women and men with families. Davaine hopes to visit Cosme in New York, where staff wellbeing is a focus of the business, as part of the prize.

On the night, the likes of Kate Reid, Lisa van Haandel, Nick Stanton and John Lethlean took the chance to catch up over glasses of Tahbilk sparkling pinot noir before sitting down to a four-course menu in the Esplanade’s storied Gershwin Room. Wood-fired focaccia, mussels escabeche and Jerusalem artichoke with black garlic kicked things off, before Sher wagyu slow-roasted in the wood oven, baby barramundi with shiitake, and Dutch creams with sour cream and chives added a touch of winter comfort.

The evening wasn’t just about fresh talent; it was also a moment to recognise the contributions and tireless work of Victoria’s hospitality heroes in the annual announcement of Melbourne Food & Wine Festival’s Legends awards.

This year, a record seven individuals were awarded Legends honours, joining 150 leaders from the food, wine and hospitality trade:

Accepting his award, Con Christopoulos had some words of encouragement for his peers in the room.

"It would be nice if we could support each other through these tough times, because better days are ahead."

Rounding out the honours was the Hostplus Trailblazer award for someone aged 40 years or younger who is making an outstanding contribution to the Melbourne food and wine industry. That went to Mike Russell of Baker Bleu, the bakery of choice for many leading Melbourne restaurants.

The night ended with more charging of glasses as guests celebrated their wins and the strength of our vibrant food and wine scene.

"The best thing about sending people on these exceptional journeys is that they come home again even more exceptional," said Dupleix, bringing the ceremony to a close.