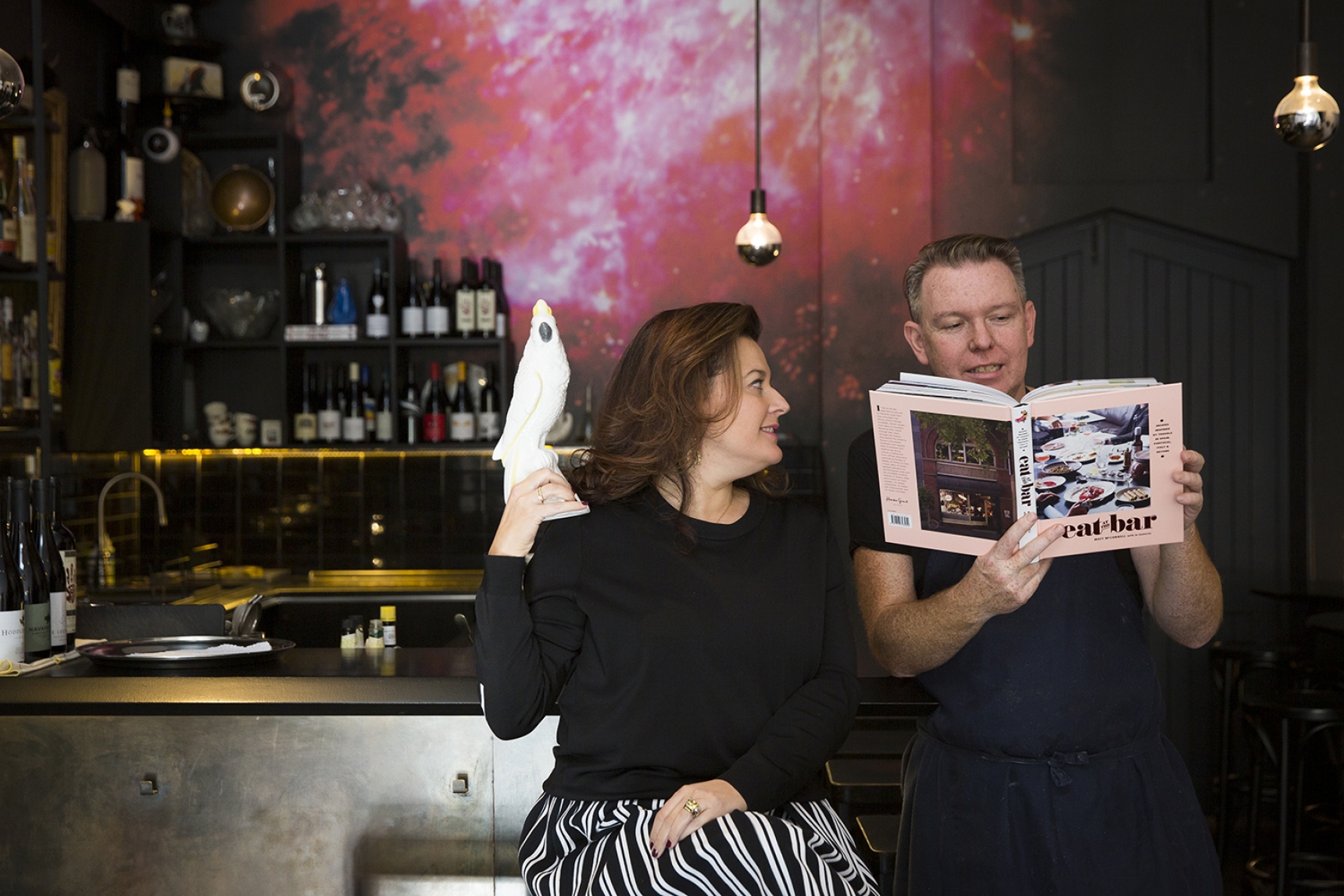 Decoding is a new column that takes a closer look at your favourite restaurants. Where did that souvenir clock promoting Miller Lite come from? Is that trophy behind the bar a family heirloom? And why is there a papier-mâché octopus in the corner?

First up, we poke into every nook and cranny of long-time Little Collins Street favourite Bar Lourinhã. Jo Gamvros and Matt McConnell opened the landmark venue with Simon Benjamin in 2006 and have been adding to its walls ever since.

There’s little chance of confusing Bar Lourinhã with another bar-eatery, even in Melbourne. Its mix of rare finds and one-off trinkets covering the walls and shelves is distinctive, to say the least. An intimate, cosy space, it’s impossible not to be drawn into the world of owners Jo Gamvros and Matt McConnell as you sit at the bar and let your eyes wander over copper plates, religious iconography, good luck charms and family photos. Organised meticulously by Gamvros, the chief collector, the bar’s objects all tell a story.

“We started the business with not much money, but we knew that we loved found treasures from overseas,” Gamvros says. “And places that we fell in love with over there were places that enjoyed displaying their treasure on the walls.” 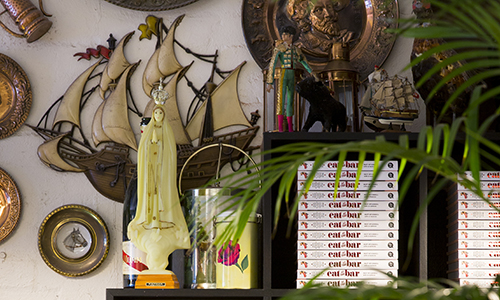 A Fatima figurine that glows in the dark

One of those places included a cellar bar in Barcelona where the father-son team adorned the walls entirely with objects depicting bulls.

“Bulls in fights, bulls on the land, drawings, sculptures, semi-reliefs – it’s amazing,” says Gamvros. “Whether you like it or not, it’s a part of their culture.”

The couple also fell in love with the European practice of stringing chillies, garlic, chorizo and more around a venue. At Bar Lourinhã, they hang as much as health regulations will allow; Gamvros even goes to the trouble of ordering whole branches of bay from Flowers Vasette. “They’re so dramatic,” she says.

Coming from a family of collectors, the venue’s décor is a passion, perhaps an obsession, for Gamvros.

“A lot of the time when I’m travelling I send back boxes and boxes of stuff to Bar Lourinhã,” she says. “Some of it arrives well, some of it doesn’t, depending on the country.” 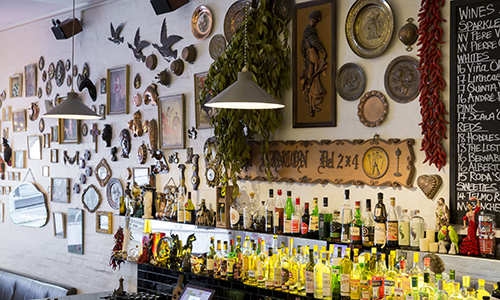 “The first thing to go up was the rincon sign. I found that in Brunswick at a second-hand dealer shop and said, ‘That’s a great way to begin’. We built the collection around that. If you see early photos of Bar Lourinhã, there’s not much on the wall at all.

“El rincon means ‘the corner’, which is kind of perfect because we’re on a corner. And two by four means the time for Argentinian tango. Even though it’s Argentinian and we’re not Argentinian, I thought I’d go for it.

“It’s beautifully made, it’s handcrafted and the wood is amazing. The edges are very particular. It just belongs there, it pulls everything together.” 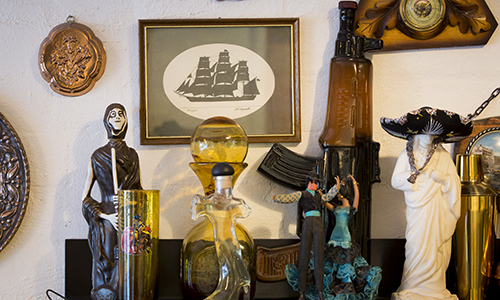 “The found objects are from all over the world. See the rifle? That’s a vodka bottle from Russia. The witch at the end with the broom is from the Basque country; the stuff that was originally in there was hallucinogenic. It’s not in there anymore because we drank it all and we gave a lot of it away to customers just to see how they reacted. It was sort of like an amaro but it had that kind of absinthe effect. It was quite intense. You didn’t need a lot.” 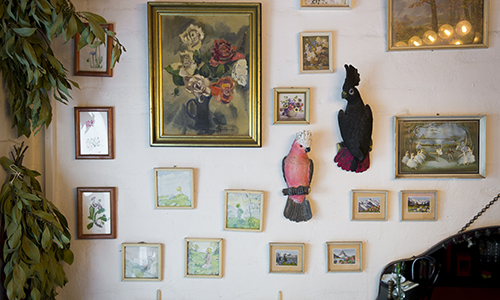 “They’re very handsome. People love them. There’s a bit of Australia in it. It’s important to have all of our culture together – the Italian, the Greek, the Australian, the Irish, the Spanish, Portuguese, Swiss.” 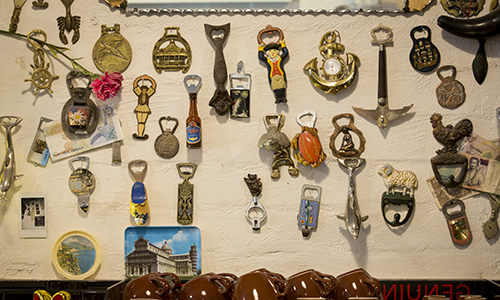 “There are a few there that I love. The dolphins are pretty amazing. One’s older than the other. I found them at different times but I couldn’t resist.

“I’m a photographer by trade. I studied at RMIT, I worked for Fairfax for seven years and I’ve presented as an artist. I shot this piece in medium-format on the Amalfi Coast. It was around 1990, near Positano. It was one of those trek-down beaches. There’s something about that piece that’s charismatic and reminds me of that time. It brings out stories at the bar. You hear people talking about lying on a beach like that or they say I want to lie on a beach like that.

“The fact that it’s part of the space makes it more accessible I think. It’s not framed by anything. That’s what I really love about it.”

“She came from Casa Iberica in Fitzroy. They said to me, ‘You have everything else, you have to have her.’ She glows at night so when everything’s closed and dark you can just see her.” 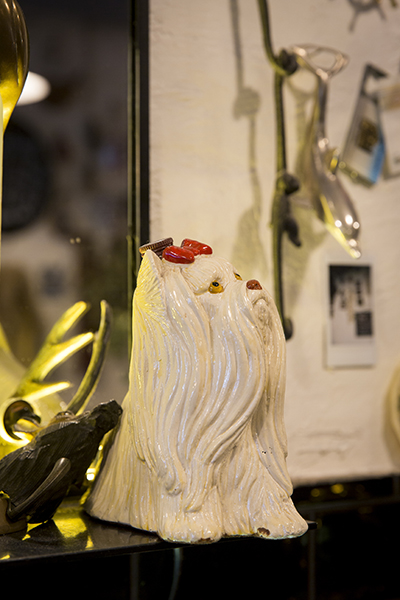 A recent addition to the collection is the Maltese terrier bottle of brandy. “That came from Malta, I put that in my bag and carried it all the way back. I had it bubble-wrapped like 20 times.”

Gamvros’s favourite part of the collection? Sharing it with others.

“Some of the stories that come out from customers are fantastic,” she says. “About their travels, about their grandmother’s collection, did they have that in their life or didn’t they. It just evolves into so many wonderful conversations.”